1) The needle itself is 'stuck' to one side. This is typical after 50+ years of dirt and grime. The needle can 'stick" to the plastic stop(s) on either side the galvanometer.

Next time it happens, try rotating the ASA dial all the way in one direction and then the other, and finally back to your normal ASA setting. If the needle was stuck, this will usually dislodge it.
The permanent cure is to remove the eyepiece diopter, and very carefully, clean the sides of the needle with a small swab soaked in alcohol. If you can see a 'fuzzy edge' on either side of the needle, the needle needs cleaning.

2) The battery adapter is sometimes built from a stack of washers. The contact points between the washers corrode or otherwise don't make electrical contact. This causes an interruption in the battery circuit and the needle won't function. loosening and retightening the battery cover may fix the problem temporarily.

3) The 'U' shaped spring at the bottom of the battery well is permanently flattened. This can happen if the adapter length is too long. Sometimes the spring is broken in half at the bend point, and an adapter is/was made to take up the difference in length.
There will not be any tension from the spring so contact will depend on the battery cover being screw down tightly. If it is screwed down too tight, the spring holder (plug) itself will be pushed away from making a good ground connection and the circuit may be interrupted.
4) Corrosion on the connections inside the camera located on the backside of the plug is causing an intermittent open. There are (2) wires. One connected to the grounding ring and 1 is connected (soldered) to the rivet holding the spring to the plug.

If there is sufficient corrosion, the wires can corrode and may have intermittent contact. The fix is to replace the wires and/or the plug.

5) There is corrosion on the ground ring that is in between the plug and the camera body. The corrosion is caused typically by a mercury battery being left in the camera for too long and subsequently leaking creating a greenish-whitish powder-like coating.

This corrosion can be 1) on the threads of the cap and body or, 2) on or near the spring in the battery well. Sometime the corrosion is superficial and while present, sometimes doesn't cause any problems.

If corrosion is present, the battery contacts and related parts should be cleaned thoroughly. You can swab the battery well with plain vinegar, which is 5% acetic acid, and the acid will dissolve the corrosion. Swap again with alcohol several times to remove any trace of the acid. Let all air dry.

When installing a new spacer kit and replacement Zinc Air Cell, be sure the spring in the battery well is in good operating order. If it is bent flat or damaged, it should be replace.

The kit sold by BolexRepair.com is designed to be a direct replacement for the original mercury cell, and it depends on the spring being in good operating order.

Posted by BolexRepair.com at 2:26 PM No comments:

To check the ASA dial calibration:

To check for proper calibration of the Bolex reflex series ASA dial:

3) The red colored 18 FPS mark should be opposite (between) the letters S&A of the ASA marking.

5) The red 18 should be opposite the first A of ASA
If the above settings don't match, the outer dial may have moved relating to its correct position or the galvanometer's internal gears may have moved relative to each other. Here's how to check:
1) Orient the camera so you are sighting from the lens towards the ASA dial.

2) If you tilt the camera whilst looking at the dial, you can see slightly under the top of the dial.

4) Almost, but not quite directly on center, you will see a pin between two cogs.

5) Note where the pin is and look on the top of the dial.

6) The pin should be aligned between the 20 and 25 ASA settings.

The outer ring is glued down. The inner ring is attached to the galvanometer's shaft. The shaft end opposite the dial has a small gear that turns another gear at a right angle. Sometimes if the glued outer dial's bond is broken, the outer dial's cogs can 'jump' the pin. If it only jumps 1 pin, one way or the other, you can compensate.

Example: If pin has jumped one cog to the right, it will now shows the pin split between the 16 and 20 ASA markings. It is now reading and calculating the ASA incorrectly and the true ASA will now be somewhat higher than that read off the dial. Not a problem as the difference is only 4 ASA.

However, when you rotate the dial to ASA 100, the same offset of the pin jumping 1 position is now off by 25 ASA. You can make a mental note of how far the offset is allow for it. Typically, you will be using the same film and once the offset is set, you can just place  the ASA vs. FPS markings normally and the meter will read correct.

If the meter is off by more than a couple of cogs, or the ASA dial seems to jump around, the meter should to be overhauled and recalibrated. This involves removing the ASA dial. The center screw of the dial is cemented in place. On about half of the cameras I recalibrate, the dial screw snaps. Not sure why - rust perhaps. On the other half of the cameras, the screw comes out normally.

If the screw breaks, the corresponding shaft of the meter assembly needs to be replaced. That in turn requires a complete camera disassembly down to the internal meter and the reassembly and recalibration of the meter and dial assemblies. This is one of those repairs that only the experienced can do. 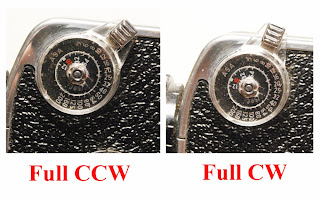 Posted by BolexRepair.com at 2:25 PM No comments: